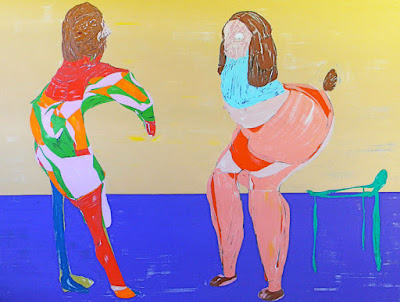 Friedrich Petzel Gallery is pleased to announce new paintings and sculptures by Nicola Tyson, September 8 – November 5, 2011.
Nicola Tyson exhibits a group of new large-scale paintings that depict two figures locked in a separate but tense relationship to one another. Each figure is rendered in the artist’s chromatically intense palette and commands its space within the canvas frame. The figures are both animated and permanently fixed by the painted surface – a trick that only paintings can readily perform. These figurative “characters” present strange physical amalgams and morphological complexities that describe an anarchic freedom rather than violence, genetic engineering or alienation. Bizarre yet strangely credible, these characters originate from fertile but exiled parts of what we might inadequately term the “subconscious” or “imagination” – some place in the complex space of the mind, beyond the reassuring confines of “reason.” The figures are filtered and translated into a kind of readable and familiar lexicon of gestures and appendages. These images are often a surprise to the artist herself. The result is playful, humorous, disturbing as well liberating. 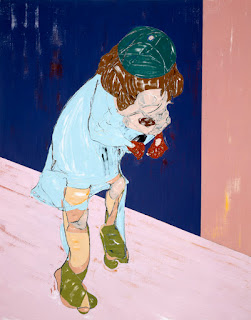 Technically, the paintings evolve out of rapid sketches that are scaled up to the size of the canvas. Tyson’s taut color decisions and very visceral, yet “dry” paint application are key ingredients in establishing the final painting. Tyson sees herself as operating in relationship to British satirical tradition going back to the 18th century caricaturist James Gillray, who himself identified a national urge towards what he termed “Mock Sublime Mad Taste” – a pushing beyond satire into anarchic freedom, an impulse that was picked up at the end of the 19th century by the Belgium artist James Ensor.
A show of small sculptures at the adjacent gallery space introduces a new direction of investigation for Tyson’s work. Tyson overcomes the limitations of two-dimensional space as she pops her figures from the flat surface and engages with them in the round. The small delicate sculptures have the immediacy of a sketch, much like her Sketch Book Drawings (last exhibited in 2007 in the same space). Each piece is created rapidly in a fast drying modeling compound but they nevertheless possess a formal weight and complexity, and intuitive attention to space. The group includes one piece cast subsequently in bronze in complete contrast to the original incredibly lightweight modeling compound.
The artist will be staging a repeat reading of her satirical letters to famous artists, during the run of the show (date to be announced). This was first performed at the gallery in May this year.
Venue name: Petzel Gallery
Address: 35 E 67th St 10065
Cross street: between Madison and Park Aves
Opening hours: Tue–Sat 10am–6pm
Transport: Subway: 6 to 68th St–Hunter College