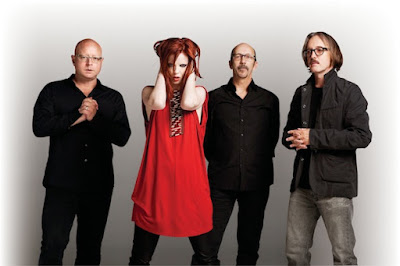 Garbage have announced full details of their new album, which is to be titled Strange Little Birds.
The album will be released on June 10th and will be available to pre-order on hmv.com in the coming days.

It is the follow-up to 2012's Not Your Kind Of People and the second to be released on the band's own Stunvolume label.

Speaking about the album, singer Shirley Manson said: "To me, this record, funnily enough, has the most to do with the first record than any of the previous records. It's getting back to that beginner's headspace. In part, that's a result of not having anyone to answer to."

The tracklisting for Strange Little Birds is as follows:
'Sometimes'
'Empty'
'Blackout'
'If I Lost You'
'Night Drive Loneliness'
'Even Though Our Love Is Doomed'
'Magnetized'
'We Never Tell'
'So We Can Stay Alive'
'Teaching Little Fingers To Play'
'Amends'