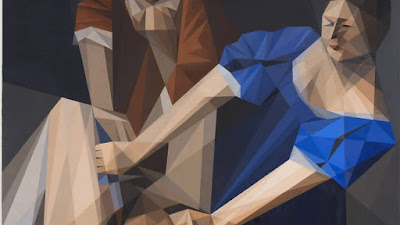 Slaying is Anna Ostoya’s third exhibition at the gallery. In her new paintings and photomontages, the artist deploys Artemisia Gentileschi’s iconic work, Judith Slaying Holofernes, as an image of violence inherent in art and in life.
The original painting depicts the story of Judith, a Jewish widow who saves her people besieged by the Assyrian army. With the help of her maidservant, she plies Holofernes, the army general, with alcohol and then beheads him in his drunken state.
In these new paintings, Ostoya inspects the crime scene, analyzing it through geometrical abstraction. She substitutes Judith for Holofernes, in Judith Slaying Judith, and Holofernes for Judith, in Holofernes Slaying Holofernes. Each gure attacks itself. These large canvases are accompanied by smaller ones where the artist further analyzes the scene.
In Slain Trances, a series of black and white photomontages, Ostoya’s investigation becomes more associative than analytical. She transforms the original painting through surrealist juxtapositions. Gentileschi’s Judith Slaying Holofernes collides with other examples of her work as well as with a painting by Georgia O’Keeffe, a snapshot of Ostoya as a teenager, a still from Possession and an image of a robot. Some photomontages are scraped and painted over, then re-photographed to generate yet other photomontages.
Venue name: Bortolami
Address: 520 W 20th St, New York , 1011
Cross street: between Tenth and Eleventh Aves
Opening hours: Tue–Sat 10am–6pm