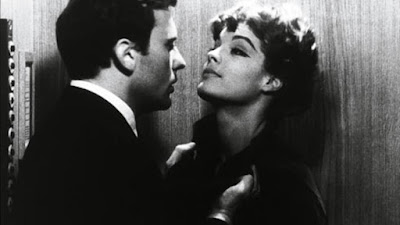 Another forgotten classic from the French New Wave, Cavalier’s first feature combines noir stylings and a jazzy beat with a searing political subtext, undoubtedly influenced by the war in Algeria.
The son of a French industrialist, Clément is a right wing extremist who belongs to a secret militant right wing organization that uses whatever means necessary, including violence, to achieve its goals. His wife Anne, a former German actress who gave up her career to be the doting wife, knows somewhat of his extremist views, and suspects he would indeed kill if need be as witnessed by what she finds hidden in their house. He often treats her poorly, especially out in public as she maintains the façade of her former celebrity, which he believes is her acting like a whore. Regardless, she is compelled to stay in the marriage. After he and a right wing colleague assassinate a Communist figure, that assassination which goes slightly awry, Clément and Anne hide out in the country home of Clément's childhood friend, Paul, who knows nothing about Clément's extremist views. Paul is a democrat and pacifist. Clément is forced to leave to pursue a mission, leaving Anne behind. Without Clément, Anne returns to her old life in the theater and into a relationship with Paul. But Clément does return much to Paul and Anne's chagrin, he who will not give up his wife without incident.