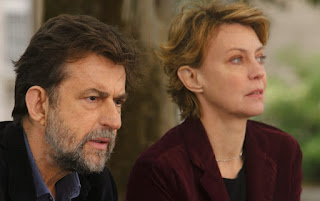 Mia Madre (English: My Mother) is a 2015 Franco-Italian drama film directed by Nanni Moretti. It was selected to compete for the Palme d'Or at the 2015 Cannes Film Festival.  It was screened in the Special Presentations section of the 2015 Toronto International Film Festival.
Margherita (Margherita Buy) is a director working on a social-realist film about a factory strike called Noi Siamo Qui (We Are Here), starring Italian-American actor Barry Huggins (John Turturro) as the factory owner. Huggins consistently fails to deliver his lines properly and the fraught nature of the shoot is exasperated by unhelpful advice from Margherita to her actors. She breaks up with her boyfriend, an actor in the film, and is divorced from the father of her daughter, Livia (Beatrice Mancini). Her brother Giovanni (Nanni Moretti) has taken time off work to help care for their ailing mother, Ada (Giulia Lazzarini), a retired classics teacher who has been hospitalised. Margherita comes to feel guilty for not taking on more responsibility for her mother and reflects on her often cold relations with her family, friends and colleagues.