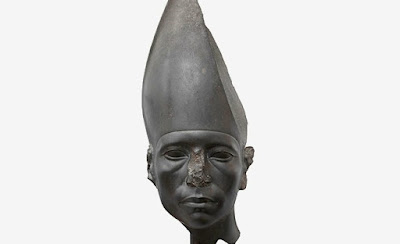 The reunification of ancient Egypt achieved by Nebhepetre Mentuhotep II—the first pharaoh of the Middle Kingdom—was followed by a great cultural flowering that lasted nearly 400 years. During the Middle Kingdom (mid-Dynasty 11–Dynasty 13, around 2030–1650 B.C.), artistic, cultural, religious, and political traditions first conceived and instituted during the Old Kingdom were revived and reimagined. This transformational era is represented through 230 powerful and compelling masterworks (individual objects and groups of objects) in the major international exhibition Ancient Egypt Transformed: The Middle Kingdom, which opened on October 12 at New York’s Metropolitan Museum of Art. Fashioned with great subtlety and sensitivity, and ranging in size from monumental stone sculptures to delicate examples of jewelry, the works of art are drawn from the preeminent collection of the Metropolitan—which is particularly rich in Middle Kingdom material—and 37 museums and collections in North America and Europe. This is the first comprehensive presentation of Middle Kingdom art and culture and features many objects that have never been shown in the United States.
The exhibition is made possible by Dorothy and Lewis B. Cullman.
Additional support is provided by The Andrew W. Mellon Foundation, Diane Carol Brandt, and The Daniel P. Davison Fund.
It is supported by an indemnity from the Federal Council on the Arts and the Humanities.
Venue name: The Metropolitan Museum of Art
Address: 1000 Fifth Ave, New York, 10028
Cross street: at 82nd St
Opening hours: Mon–Thu, Sun 10am–5:30pm; Fri, Sat 10am–9pm.