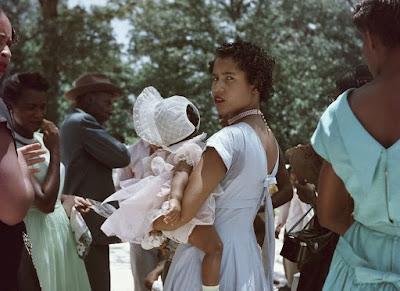 On Wednesday, November 4th, Salon 94 Freemans will present Segregation Story by Gordon Parks (1912-2006), who took the images while on assignment as a staff photographer for Life Magazine in 1956. The show marks the first solo exhibition of the work in New York. Life Magazine originally published twenty-six of the photographs with text by Robert Wallace, creating a watershed moment in the civil rights struggle.
Parks’s images vividly chronicle the day-to-day life of the Thornton, Causey, and Tanner families facing the realities of living in the Jim Crow South. The poignant photo essay proved to be a national catalyst for opposition to the systemic racial inequalities in the South and directly impacted the lives the subjects. The images were thought to be lost for decades, but in 2012 The Gordon Parks Foundation recently came across hundreds of transparencies, most never seen before. According to Salon 94’s Jeanne Greenberg Rohaytn “The images deserved to be seen in New York, especially given the dramatic role that images and their dissemination are currently playing in the conversation about race in this country.” Marilyn Minter, the contemporary artist, adds “The images knocked me out when I saw them exhibited at the High Museum in Atlanta. They brought me back in time and captured a truth about what it was like to live there. It’s clear to me that he was risking his life taking some of those pictures."
The photographs on view include humble family portraits and scenes at home alongside devastating images of neatly dressed African-American men, women, and children being forced to submit to second-class status. A sedate image of Mr. & Mrs. Albert Thornton seated at home beneath their wedding portrait taken fifty years earlier contrasts with a photo of his elegant daughter being forced to enter a movie theater via the “Colored” entrance. The Thornton’s great-grandchildren are portrayed playing with the puddles outside their home after a rainstorm and in another image are seen standing outside the chain link fence surrounding a “Whites Only” playground complete with Ferris wheel.