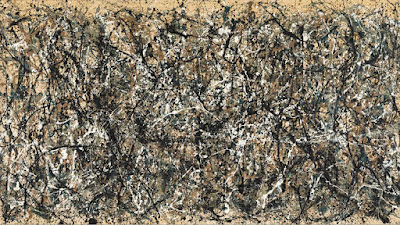 This exhibition offers a concise but detailed survey of the work of Jackson Pollock (American, 1912–1956). It tracks his artistic evolution from the 1930s and early 1940s, when he made loosely figurative images based on mythical or primeval themes, to the late 1940s and early 1950s, when he pioneered the radical abstractions for which he is best known by pouring and dripping paint onto canvas or paper. The exhibition features approximately 50 works—paintings, drawings, and prints—from the Museum’s collection, which is unparalleled in the breadth, depth, and quality of its Pollock holdings. Among the paintings on view is One: Number 31, 1950 (1950), arguably Pollock’s greatest masterpiece, and one of his largest canvases. Exceedingly rare and little-known engravings, lithographs, screenprints, and drawings are also included, highlighting an underappreciated side of one of the most important and influential American artists of the 20th century. By bringing together works made using a range of materials and techniques—both traditional and unorthodox—the exhibition underscores the relentless experimentation and emphasis on process that was at the heart of Pollock’s creativity.
Venue name: Museum of Modern Art (MoMA)
Address: 11 W 53rd St, New York
Cross street: between Fifth and Sixth Aves
Opening hours: Mon–Thu, Sat,
Sun 10:30am–5:30pm; Fri 10:30am–8pm.