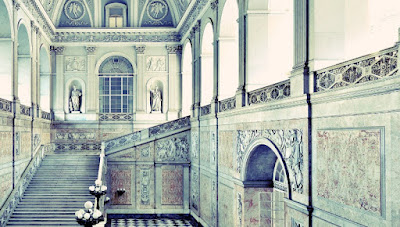 at Kunsthistorisches Museum, Vienna
Jan 30, 2015 - Oct 26, 2015
Born in Florence in 1953, even as a child Massimo Listri busied himself with the photographic medium, and when he was an art student he supplied many photographs to periodicals devoted to art, architecture and interior design.
In 1981, together with Vittorio Sgarbi, Massimo Listri co-founded the international periodical FMR published by Franco Maria Ricci, who at the time was establishing a highly exclusive art publishing house in Milan. Central to both the periodical and Ricci’s books was a kind of photography that reached new summits of achievement with bold angles and off-centre focusing – always with the goal of doing justice to the uniqueness of the photographic subject.
As a freelance art photographer, Listri developed his fascinating interior perspectives, all artistic spaces devoid of human beings, and his series of international libraries, including monastic libraries such as Kremsmünster. In addition, his series “Building Sites” features atmospheric and melancholic photographs of spaces upon which work is in progress. As if awoken by his lens, Listri’s interiors live a life of their own, independent of the human race, a life that manifests itself under the influence of light in the precision of their detail.


In the last thirty years Massimo Listri has brought out more than sixty books in collaboration with some of the best-known publishing houses of Europe and the USA.
Labels: art
Location: Βιέννη, Αυστρία