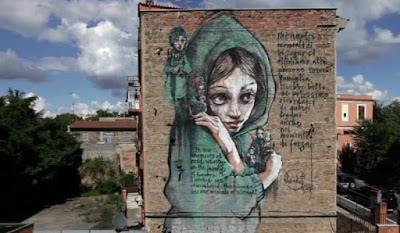 German street artists Herakut have completed a mural in the east Rome district of Torpignattara, as part of the ongoing Street Heart project organised by Galleria Varsi, with the support of local city authorities.
Herakut’s mural on Via Capua 14 features a young Palestinian refugee, wearing a hoodie instead of the traditional hijab, and coincides with their exhibition Santa Miseria at Galleria Varsi.
Speaking to Italian newspaper La Repubblica, Hera described the duo’s collaboration as “not being a question of artistic ego but more about the finished product”, joking: “It’s not bad having two brains and four hands.”
Since last year the Street Heart project has seen a series of well-known Italian and international street artists enliven the adjoining suburbs of Pigneto and Torpignattara.
The project is coordinated by the dynamic and well-organised Galleria Varsi which is located near Campo de’ Fiori and hosts regular exhibitions by street artists.
For wide selection of images of Herakut’s mural, and others, check Blind Eye Factory website.