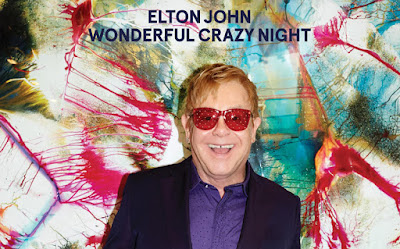 Elton John has announced full details of his new album Wonderful Crazy Night. The album is the singer's 33rd of his career and will be released on February 5th next year. The lead-off single 'Looking Up' is out now, you can hear it at the bottom of the page. Wonderful Crazy Night has been produced by T-Bone Burnett and was recorded at The Village in Los Angeles. To celebrate the release of the new album John has announced three huge UK shows.
He will play Lincolnshire County Showground on June 10th next summer, Leicestershire County Cricket Club on June 11th and Exeter Westpoint Arena on June 19th.
You can find full ticket details click here.
The tracklisting for Wonderful Crazy Night is as follows:
'Wonderful Crazy Night'
'In The Name Of You'
'Claw Hammer'
'Blue Wonderful'
'I've Got 2 Wings'
'A Good Heart'
'Looking Up'
'Guilty Pleasure'
'Tambourine' 'The Open Chord'
Labels: music