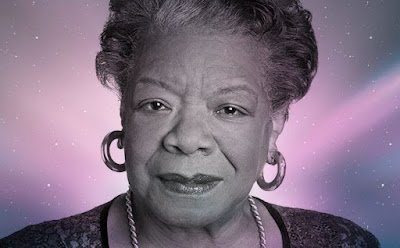 The art collection of celebrated writer and civil rights activist Maya Angelou sold for nearly $1.3 million on Tuesday.
A painted story quilt that hung in Angelou’s Harlem home and was commissioned by Oprah Winfrey for Angelou’s 61st birthday brought $461,000 at the Swann Galleries sale.
“Maya’s Quilt of Life” by African-American artist Faith Ringgold depicts Angelou surrounded by flowers along with excerpts from some of her writings. The acrylic on canvas with a pieced fabric border had a pre-sale estimate of $150,000 to $250,000.
The nearly 50 artworks were consigned to the auction house’s African-American Fine Art Department by Angelou’s estate.
“Kumasi Market,” an oil-and-acrylic painting of a crowded Ghanaian market scene by African-American muralist John Biggers, sold for $389,000, an auction record for Biggers, and above the $100,000 to $150,000 estimate.
“The Obeah’s Choice,” a watercolor by Romare Bearden of two African-Caribbean women, was purchased for $87,500. It has been estimated to bring $20,000 to $30,000.
A painting by Jonathan Green, “Wading in the Surf,” sold for $13,750. Its pre-sale estimate was $8,000 to $12,000.
Her personal papers, including letters to Malcolm X and James Baldwin, are housed at the Schomburg Center for Research in Black Culture, a research unit of the New York Public Library.